Empowerment and determination are good companions 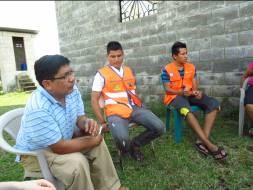 It really brings it home to you about living in an area prone to flooding and earthquakes in coastal El Salvador when a young man tells you. “We are concerned about climate change. It is raining more now. The problem is that when the rains come, this area floods. There is more illness like fungal infections, colds and even pneumonia.”

The Civil Protection Committee in Mangle works with many NGOs, including Christian Aid’s partner PROCARES, and the Municipal Governor. PROCARES’s contribution has been the construction of a raised floor building and technical training.  It is 3 years since it was built and was a safe haven in the E12 tropical storm of 2011.  10 local communities have formed themselves into disaster prepared committees. The multipurpose building opposite the shelter, also raised up, is used as a church and a school.

Annanit, a committee member, spoke of the importance of knowing how to protect themselves. They are now able to support their community whether it is a flood or earthquake. They have received training on first aid, search, rescue and evacuation.

An early warning system from the community radio warns of impending trouble. They are kept informed of high levels on the Lempa River. They know this means gates of Lempa´s dam will be opened and this area will flood. It is not only people but crops and animals that can be lost too.

Two years ago the group were able to put their training into practice and save lives. Before, people just ran away in all directions. Now, because of their training, the committee know that they must get people to the centre and, if the water rises even higher, to the nearest hill.

Another young person explained, “The climate has changed. It is raining in December and it never did before. The rainy season is almost dry too and so warm. The wind is stronger than years ago. In February the wind is extra strong.”

The changes in climate are affecting everyone. A shrimp farmer talked of heavier rain and winds. When these come they have to protect their shrimps or they will die. If there is not rain and it is hot, then water has to be obtained from the river. As always it is the children and the elderly who are most affected, as they are vulnerable to illness and are harder to move if the flooding comes quickly.

Santos Cruz remembers the last flood when the water came up to the top of the steps of the buildings.

“I was worried about my family, it made me ill thinking about them. I did not know if they were OK or not. I was coordinating the rescue but I fell and hurt my ribs. We were putting a rope across the river to make it safer to cross.  The nearest clinic is 17 kilometres away but we had basic first aid.”

PROCARES is just one of the many aid agencies working together with the local government to give the people of Mangle a chance to be in control of their own lives. The committee know they should not accept the current situation so are asking for more safeguards, including dredging of the river and repair to damaged roads. Empowerment and determination are good companions.

Living God's Love in the heart of the community
x
Top

We use cookies to ensure that we give you the best experience on our website. By continuing to browse this site you consent to the use of cookies. Find out more.