Working for a safe and democratic future 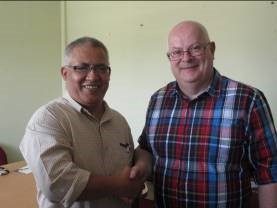 Christian Aid often works with partners who encourage gender equality and awareness and knowledge of human rights. Fundacion de Estudios para la Aplicacion del Derecho  (FESPAD) is one such partner. They are a non-governmental organisation (NGO) comprising of lawyers who study security and violence in the country and collect data to analyse the situation in El Salvador. They work closely with their local representatives from the violence prevention committee in Cuidad Delgrado, San Salvador.

Nelson Flores runs their programme for citizen security. He spoke of the increased violence in the capital city of San Salvador. In May 2014, 9 homicides a day was average. They saw a significant reduction in violence in 2012 as a result of a truce with the two rival gangs MS13 and E17, named after the streets in Los Angeles from where they were formed. There were even days with no deaths but now the figure is rising again. Violence against police officers has increased as the gangs try to pressure the new government (sworn in May 2014) into negotiations. Their greatest fear is the death squads and organised criminals moving in.

Another problem they encounter is the rivalry between the gangs together with a high level of gun ownership. Getting a gun is easy in El Salvador and 80% of people have a firearm. This means there are about 250,000 firearms on the streets. At FESPAD, they are working with the two main gangs but have to spend a great deal of time on trust and transparency. Working with gangs and police means there can be no misunderstanding.

Christian Aid’s grant supports FESPAD lawyers’ technical work with the community and municipal committees. Their statistical work on violence (gender and gang related) is used by the municipality and government to develop new strategies.

As part of the curriculum at primary level, children visit FESPAD’s offices for workshops on gang culture and its impact on lives and the community. They work with many gang members who have come out of jail and with other community organisations looking at violence with both victims and perpetrators.

FESPAD works in 7 of the 13 municipalities in El Salvador. In each, there will be at least one church with whom they work closely. They have agreements with both Catholic Social Services and Emmanuel Baptist Church.  Sometimes joining a church is a way out of a gang – along with renewing contact with family and obtaining employment. FESPAD are also involved in the ‘Pacification Plan’. This is a government proposal which aims to look at and work on prevention, rehabilitation into society and social dialogue.

The director of FESPAD, Maria, knows for certain that the perpetrators of the many violent crimes committed are also the victims of a system that has failed and marginalised them. FESPAD is trying to reach out to those perpetrators and through different experiences give them a future not ruled by gang culture. It is a hard task, but their sheer dedication to the subject must bring success.

I am the webmaster for Purley United Reformed Church and have been involved with the church since my late teens. I work in Croydon and live in Caterham.