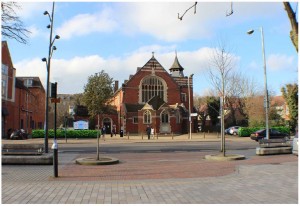 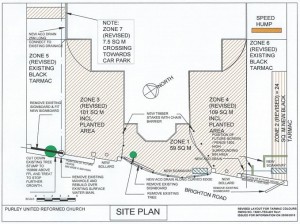 Began at the Elders Emmaus Retreat in March 2014 with discussions on the need to improve our premises and the Church’s profile to the local community through better use of external and internal signage, upkeep of grounds and garden areas, notice boards and especially the frontage facing the Brighton Road. These discussions were reported to the Elders and Church Meetings in May / June 2014.

In August / September 2014 the following individuals formed the group to look into improving the external presentation of the church:

The initial review was directed at the following areas:

All the areas were to be studied with a view to reducing maintenance and clutter while enhancing the visual impact of the building.

At the June 2015 AGM a slide presentation was made to Church Meeting providing details of the work the group felt needed to be carried out to enhance the view of what is a beautiful church building rather than hide it as is the present position. This would at the same time reduce the required maintenance. The proposals were agreed by that meeting and a resolution backing these proposals was agreed to obtain Southern Synod approval of the project. This approval was given on 20th July 2015.

The September Church Meeting was advised that due to delays in finalising the contractors and colouring of the tarmac we were now approaching the winter period when it would be difficult to lay the tarmac. While we have split the project into various segments they are all connected and for the most part cannot be treated in isolation when the work is carried out. For that reason we have delayed implementing the majority of the work until March 2016. Below are details of the present position with regards to each portion of the project.

Since the AGM the group (under advice) have increased the speed reduction humps along the hospital side from one to two. The first one as previously advised, near the three parallel parking spaces just before the tower, with the second just below the downward slope from the back of the church buildings. The advice received was that two humps are more likely to slow traffic than a single one.

The final areas of low maintenance shrubbery, posts, fencing and placement of the benches (in the middle framing the commemorative stone) will be carried out as the tarmacing is completed.

The Group appreciates the support that it has had from members of the congregation.

For and on behalf of the Group,