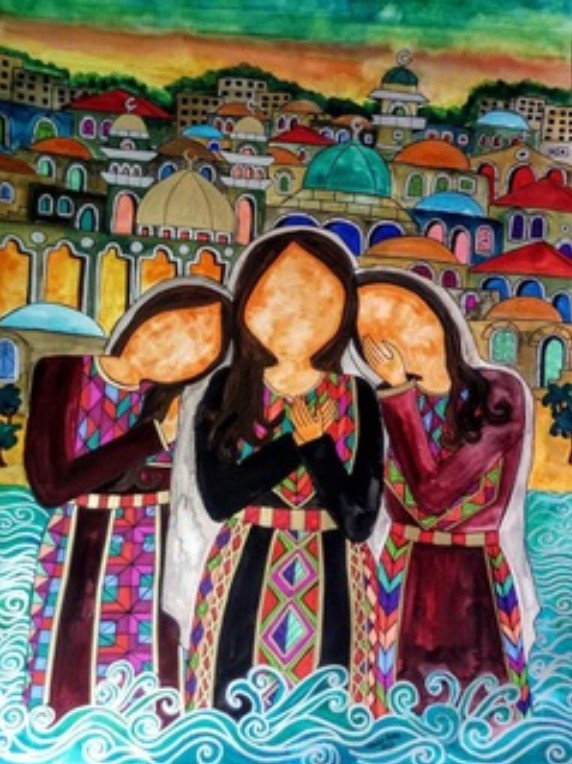 Rawan Anani is a Palestinian artist whose colourful paintings evoke her love for her homeland and its culture. Recently, ‘Roots’ magazine drew my attention to her recently painted ’Gaza in my heart’ which shows three women standing in the waters off Gaza closely drawn together and set against a backcloth of a traditional roofscape of Gaza. The crescents on the top of a number of buildings are intended to suggest the minarets of mosques; but it is also notable that one building is marked with a cross – a reminder that, though the Christian community of Gaza is now very much diminished in size, Gaza has been a city where Christians and Muslims have lived together for centuries.

However, perhaps because Trinity Sunday was in my mind, when I saw Anani’s painting I was reminded of the very famous icon of the Trinity by Andre Rublev, which depicts the three divine figures who visited Abraham (Genesis 18.1-15), and which is called ‘the Icon of the Hospitality of Abraham’. The pose of the three women in Anani’s painting is curiously reminiscent of the pose of Rublev’s angels, and both Rublev and Anani seem to invite the viewer to enter the picture and join the circle. One key difference of course is that the features of the faces of the women are somehow ‘blotted out’ which is a sad reflection on the way much of the world has blotted out the plight of those currently living in Gaza and the sadness of the current situation in Gaza and other places in Israel and Palestine.

In the echo of the ‘hospitality of Abraham’ may lie some hope for Gaza and beyond.  Abraham is of course a figure who is important to Jews and Muslims, as well as Christians. So is the story of the near sacrifice of his son. Can Abraham become a common thread of reconciliation for his strife-ridden contemporary children, in Israel, in Palestine and throughout our world today?  After all, Abraham is the first human being in the Bible who is the subject of the verb ‘love’.

“Abraham’s house was open to all … To those who were hungry he gave bread, and the guests ate and drank and were filled. Those who came naked to his house he clothed, and helped them to experience God, the creator of all things.”

With love and prayers, Russell

Thursday Playtime has restarted but with restrictions – see calendar for more details.
The Book Fair is open every Saturday, 10 am to 12 noon.
Sunday Morning Worship is open to everyone – all are welcome – services start at 10.30 am every Sunday.
Please note face coverings are required when on the Church Premises unless you are exempt.